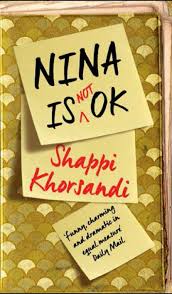 Sometimes it’s really important to actually read the blurb of a book before you decide to read it. Sometimes recognising the author’s name and thinking, “oh, I like her; she’s funny” is not actually a guarantee of your enjoyment when reading. Of course, sometimes a book cover says things like “richly comic” and “likeable” and those things are complete lies. So there’s that too.

I really struggled with Shappi Khorsandi’s Nina is Not OK. From the opening chapter, in which Nina is so drunk that she cannot remember what happened in an alleyway with two older men, to the multitude of demeaning things Nina goes on to do as she comes to rely more and more on alcohol, it’s not a cheerful book; whoever provided the quotes on the cover probably needs some kind of mental health evaluation if they genuinely found this “comic” and “likeable.” The book has its moments of redemption, as Nina finally recognises her problem with alcohol, but this is short-lived; reading this book was a little like watching the news during a particularly dark time, with every development making you want to bury yourself more deeply under a pile of cushions.

The thing is, I completely recognise that books about alcohol abuse in teens are necessary; if I’d read this as a teenager I would probably have never have touched alcohol in my entire life. The themes of sexual assault are obviously hugely important too; a book that deals in the rape of a character could never be pleasant and shouldn’t attempt to be, but there were many things about the treatment of this subject which made me feel uncomfortable. Nina’s friends, with one notable exception, are astonishingly insensitive; Beth, who calls herself a feminist, seems to delight in denouncing Nina as a slut, while the actions of Zoe, another supposed friend, are unconscionable. Perhaps I am just naive, or am lucky to have been blessed with good friends, but I found it really hard to believe that anyone could behave the way these two do. And as for Nina’s mother… how could leaving the country while your daughter is clearly in the midst of some kind of breakdown possibly seem like an acceptable plan? I’m not opposed to flawed characters and everything I read seems to involve crappy parents, but these ones seemed so abhorrent they were almost caricatured.

For me, a problem is the book’s similarity to Louise O’Neill’s Asking For It. That book has haunted me since I read it last year; it was horrific to read, of course, but completely compulsive, because O’Neill successfully skewers everything that’s wrong with how rape victims are treated, both by the media and in society as a whole. There was a political purpose to the pain involved in reading Asking For It, which, now that I think about it, is perhaps what made it vital where Nina is Not OK was just arduous

I was naive in reading Nina is Not OK, assuming it would be funny; when I now think of all the novels by comedians that I’ve read, they’re all actually far darker than you’d expect (I’m thinking of Ardal O’Hanlon’s Talk of the Town, for one). I’m not sure how coherently I can express the discomfort I felt while reading Shappi Khorsandi’s book, but I can definitely say it’s a troubling read.