I was tagged for this by _giovannard at bookcomablog and I like these things. So here’s mine.

After joining a Twitter discussion on representation of mental health issues in YA fiction, I started thinking more about the adult novels I’ve read recently which also cover this ground. Among my random January selections from my ever-growing TBR were Mr Chartwell by Rebecca Hunt (Penguin, 2011) and All My Puny Sorrows by Miriam Toews (Faber and Faber, 2014), both of which were excellent books in their own right, but fascinating and sympathetic portrayals of mental illness as well.

Mr Chartwell has a brilliantly original premise; expanding on the idea of the Winston Churchill’s “black dog” of depression, Rebecca Hunt pulls off the astounding feat of including an enormous, talking canine in a book without making the story ridiculous. I don’t know if I am capable of describing Mr Chartwell in a way which does the book justice.  The story is told in alternating chapters, focusing on Esther, a library clerk trying to cope with the loss of her husband, and Churchill during the final days of his political career. Esther advertises for a lodger and the sole applicant is Black Pat, a huge, obnoxious and intrusive dog; it soon becomes apparent that his appearance is no coincidence, as Esther’s sadness threatens to overtake her. Churchill, resigned to the dog’s intermittent appearances, is far more combative; his attitude is a fascinating mix of acceptance and aggression. Hunt’s novel combines elements of liminal fantasy, magical realism and allegory in constructing Black Pat; he’s truly creepy, nowhere more so than when he is almost seductive (Esther feeling compelled to give him a bath, for example, is oddly frightening).

The really clever thing about Mr Chartwell is the way in which it gives a perspective on depression which I have never seen before; embodied by Black Pat, it is something which forces its way in, refuses to leave, follows you around and constantly tells you that you aren’t good enough. I have no firsthand experience of depression; obviously I understand it is an illness, a debilitating one, which causes terrible suffering, but Hunt’s book, bizarre as the concept is, gives depression a personality which enables the reader to achieve a little bit more understanding of this particular mental health issue.

The other book I’m going to discuss here is All My Puny Sorrows, which I read last week. A

brief summary makes it sound horribly bleak – a woman tries to persuade her sister not to kill herself – but Toews’ book is so much more than this. So many pertinent issues are explored in the novel, from mental illness as a genetic inheritance to the effects on those around someone suffering from serious depression. Elfrieda has always struggled with depression, resulting in episodes which have frightened her younger sister Yolandi since childhood; All My Puny Sorrows picks up the story after Elfrieda’s latest suicide attempt, with Yolandi leaving her teenage children to be by her sister’s side. What stops this from being purely an incredibly bleak story is Yolandi’s narrative voice; Toews doesn’t hold back in presenting her narrator’s intense frustration and heartbreak, and I finished the novel feeling a sense of compassion for everyone involved in the story.

I’ve often taught the poems of Sylvia Plath to sixth formers and doing so inevitably leads to a discussion of her suicide. I’m genuinely upset every time (and it has happened more than once) one of my students asks “but what did she have to be depressed about?” The question demonstrates the extent to which the word “depressed” has become a synonym for “fed up” rather than descriptive of a mental illness. I feel like All My Puny Sorrows offers a response to this question, in its depiction of depression as something that happens, perhaps with external triggers, but principally in the same way that a more physical illness happens. Elfrieda’s suffering is palpable and incredibly affecting, while Toews’ focus on her family, partner and colleagues is also compelling. As Yolandi is forced to consider whether to help Elfrieda end her life, the reader is also given the opportunity to contemplate the questions she asks herself; I couldn’t answer any of them, and so my empathy for Yolandi grew.

I wouldn’t dare to second-guess the response to these books by someone who has experienced the issues described (although I’d be really interested to know), but as someone on the outside, I feel like reading both of these gave me a much better understanding of depression and the different ways in which it can manifest itself. Mr Chartwell is a particularly ingenious book which deserves to be read by everyone. I think All My Puny Sorrows does an equally impressive job of showing the reader the reality of life on the periphery of depression; a review in The Guardian described it as a book that “sheds light on the darkest of places,” which it does both in the sense of revealing truth and using humour in the voice of the narrator.

If you’ve read either of these books, I’d love to have a discussion in the comments. Any others which you think belong alongside these two?

Today, I am feeling extremely disappointed with myself. I have made my now-annual attempt to convert myself to the cult of Charles Dickens, and, once again, failed miserably. With “miserably” being the key word.

I don’t know what my problem is with Dickens. I read Great Expectations at school and have vague memories of enjoying it; I was young and impressionable back then, and probably so excited to be reading ‘a classic’ that I didn’t really know what I was doing. I’ve also obviously read A Christmas Carol at some point, because I know all the bits in the Muppets’ version which deviate from the original (Bob Cratchit is not actually a frog! Did you know?). At university, on the infamous misogynistic Victorians course which I have mentioned about 78 times on my blog, I read Oliver Twist and was appalled by how boring it was; it was really long and nobody sang ‘Oom Pah Pah.’ After that, I gave up on Dickens for a very long time.

Then, last year, I became obsessed with the beautiful Penguin English Library series and started accumulating these lovely books with an almost religious fervour. I had to buy a new bookcase just to house them; it is next to my bed so they are the first thing I see when I wake up. I have a strong urge to collect all these books, which will mean procuring a large number of Dickens novels – of the 100 books in the series, I think about 15 are by Dickens.

So, in 2015, I read The Old Curiosity Shop, which was a massive fail on all counts; I didn’t really enjoy the book and, having foolishly bought it on eBay, I was saddled with a ropey-looking cover. Sad times all round. I was ready to give up. But then I remembered that  used to hate Hardy and, after reading most of his books last year, I now love him and want a life-size mural of his face in my lounge. So I persevered with Dickens, opting for the really cheerful and fun-sounding Hard Times this year.

There can’t be that many books with a title that accurately describes the experience of actually reading them, so, in this sense, Hard Times is a unique and impressive achievement. This book made me so sad. Not because of any Little Nell-type trauma, but just because I was so bored. I am fairly sure that nothing actually happened until about 220 pages in, by which time I had completely and wholeheartedly lost interest. None of the characters caught my attention and the story didn’t engage me. So that’s that.

But what does this say about me? As a complete nerd of English literature and devotee of the Victorian novel, why am I incapable of enjoying Dickens? I know that I put unhelpful amounts of pressure on myself to read and appreciate his work, because I worry what it means when I find myself cleaning my oven to avoid reading one of his books. I’m not put off by really long novels and it’s not like I don’t understand the language, so what is my problem? I don’t want to give up on Dickens, but, at the same time, I don’t want to keep reading long books which give me no pleasure at all. I also want more beautiful Penguin English Library books.

So, people of the internet, please help me. What Dickens should I be attempting next? Which is the one that will win me over, at least so I can say that there is one Charles Dickens novel that I like? I feel like I can only go so far in life by saying, “but I REALLY LOVE Hardy and would get all questions about him right on University Challenge.” I need you, bookish people. Don’t let me down. 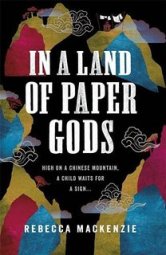 One of my favourite books of all time ever is To Kill a Mockingbird and one of the many, many reasons for this is the adorable but not cutesy main character: Scout provides the novel with such vibrancy, innocence and wit that she is basically irresistible. Rebecca Mackenzie’s In a Land of Paper Gods gave me a similar feeling, thanks to the gloriously honest and eccentric narrative provided by Etta, the book’s young protagonist.

Etta is the child of English missionaries, born and raised in China and sent to a secluded boarding school in the mountains at the age of 6. The setting is beautifully realised; every time I picked the book up, I felt immersed in the mists of the mountains and eager to explore the surroundings along with the characters.

Mackenzie does a terrific job of presenting Etta as a rounded character; she is amusing and insecure, imaginative and deceitful, desperate to be liked and isolated by her attempts to make her secluded life more fun. The creation of the Prophetess Club provides moments of humour as well as tragedy, and Mackenzie’s portrayal of the ever-changing loyalties of young girls, along with their rivalries and bids for alpha status are quite frighteningly accurate. Underpinning all of this is the yearning the girls feel for their mothers, adding pathos to the daily life described.

The seemingly small events of Etta’s daily life are set against the backdrop of the Japanese occupation of China, creating a sense of constant tension and fear (again, recalling Harper Lee’s use of racial tension to underpin the initial action of To Kill a Mockingbird); this is a period of history and an aspect of WWII which I didn’t know about before, but Mackenzie’s references to it give plenty of contextual detail without turning In a Land of Paper Gods into a history textbook. The final act of the novel and its use of historical detail is a big change and a fascinating one. I felt pleasantly submerged in the place and time period; Mackenzie’s writing beautifully depicts both in a realistic but artistic way.

Basically, I really enjoyed In a Land of Paper Gods. It uses its child protagonist to tremendous effect, making the reader feel sad, amused and like you want to give the characters a hug all at the same time.