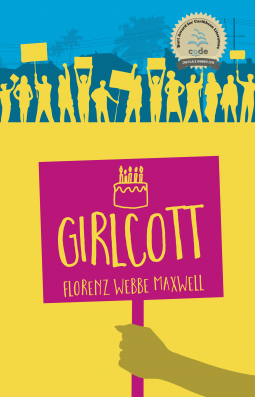 One of my big passions in reading is finding reasonably obscure YA novels, especially diverse ones that also come under the heading of historical fiction. In Girlcott, I found something to satisfy all these needs.

Set in the Bahamas in 1959, Girlcott tells the story of a real-life boycott which was aimed at ending racial segregation. Our main figure in the story is sixteen year old Desma, who is looking forward both to her birthday celebrations and the scholarship which will give her a chance to achieve her dream of becoming qualified as an actuary. But when the mysterious Progressive League announces a boycott of cinemas as a protest against the segregation that negatively impacts the black population, Desma finds her plans derailed in more ways than one.

In some ways, Girlcott is a little frustrating; the politics in the background are intriguing, but Desma, initially anyway, is only concerned about whether her birthday party will go ahead, which irritated me until I remember that she’s a teenager so it’s quite likely that her feelings would be shared by any other nearly sixteen year old anywhere. Her early self-centredness makes her gradual understanding more effective too, as she quickly learns the significance and necessity of what the Progressive League is doing.

There are some very effective sections in the book. The one which has stuck with me the most since reading concerned Desma and a local white family for whom she had babysat, and who are keen for her to come and work for them as a nanny. Early in the novel, Desma turns down this offer, but has to do so delicately to avoid causing offence, even though it is her who should be affronted by a suggestion that doesn’t take into account her potential. It’s an eye-opening episode, for both Desma and the reader.

Girlcott is a pretty slight novel – it took me less than a couple of hours to read – but it packs a punch by using real-life but little known events that have topical value even now. I’d recommend it to anyone looking for more varied YA, particularly those with an interest in history.