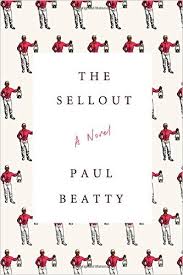 Fourth on my reading list of Booker-shortlisted novels was Paul Beatty’s The Sellout. By pure coincidence, it’s the first from the list I’ve read which was written by a man; for once, not a feminist decision but one dictated by how soon the library fulfilled my eager requests. Of the three I’d read already, Madeleine Thien’s Do Not Say We Have Nothing was slightly edging it. Let’s see how The Sellout compares.

Beatty’s novel centres on a man called Me, presumably chosen in order to add humour to his Supreme Court case, which is consequently named Me Vs The United States of America. Elsewhere, Me is called BonBon, a childhood nickname that stuck; we never find out his real first name. Which makes writing about the book a little more complicated. So, what has this mysteriously unnamed character been up to? Well, after his suburb of Los Angeles is removed from the map, he takes it upon himself to reinstate it. Initially, this means redrawing the city limits. Then a clearly deranged former child star decides he wants to be the narrator’s slave. Then he decides that resegregation is a good idea.

My first thought on The Sellout was that it was ten thousand times better than Underground Airlines by Ben H. Winters, which has a slightly linked premise involving slavery. The idea of privilege is one that wraps my brain up in knots sometimes, but reading Underground Airlines made me feel slightly uncomfortable, like I was reading something that maybe shouldn’t have been written in the first place. The Sellout‘s approach to race is far more compelling, with a more authentic-sounding voice, which makes sense given that Beatty is black and Winters is not. The Sellout is deeply satirical, and sometimes I wasn’t exactly sure what it was meant to be satirising; the character of Hominy, who seems to long for a return to a pre-civil rights movement way of life, is the driving force behind much of the shocking race-related content, and I felt his obvious delusion made this quite confusing. The local bus is resegregated because he is desperate to give up his seat for a white person, and then frustrated because no white people actually get on the bus. The sign dictating the giving up of a seat stays on, however, and this leads to better social conduct on the bus, supposedly because the passengers (who are all black or Mexican) feel reminded of how far they’ve come in terms of their rights. I presume, then, that Beatty is satirising the attitude that oppressed people should just feel grateful for the progress that’s been made rather than fighting for true equality. This is an excellent point, and it’s cleverly made: maybe a little too cleverly.

Of the Booker shortlist novels I’ve read so far, The Sellout is easily the best written. I’ve never read Beatty before and I was in awe of the dizzying nature of the early chapters; it’s not always easy to work out what’s happening (and, sometimes, nothing is) but the humour and skewering of attitudes and cultures are on point. In its precision, The Sellout is the polar opposite of the meandering Hot Milk, also nominated for the big prize.

Although I’m not entirely sure that I grasped The Sellout completely (for example, I have found since reading that the Little Rascals, the show Hominy was part of, was a real thing, which I had no idea of when I was reading), I was really impressed by it. If the point of satire is to shock the reader and inspire action, I think it’s definitely effective in that respect. I might just need to read it again to fully appreciate it. It’s a very strong contender for the Booker, in this reader’s opinion.

3 thoughts on “Review: The Sellout by Paul Beatty”