When We Collided by Emery Lord (Bloomsbury, January 2016) is the story of Vivi and Jonah, two teenagers who meet and fall in love in the space of a dramatic summer. I never usually copy and paste book summaries but, on this occasion, I’m going to let the blurb from NetGalley speak for me:

Seventeen year old Jonah Daniels has lived in Verona Cove, California, his whole life, and only one thing has ever changed: his father used to be alive, and now he’s not. Now Jonah must numbly take care of his family as they reel from their tragedy. Cue next change: Vivi Alexander, new girl in town. Vivi is in love with life. A gorgeous and unfiltered hurricane of thoughts and feelings. She seems like she’s from another planet as she transforms Jonah’s family and changes his life. But there are always consequences when worlds collide…

This neatly sums up the two distinct voices that narrate the novel, as well as providing a handy way to summarise my own issues with the book. First of all, I felt really immersed in Jonah’s parts of the story; the difficulty of acting like a grown-up, caring for three younger siblings, at the age of just seventeen provides plenty of pathos, and Emery Lord manages this without creating excess sentiment. It’s a sad situation, but it’s a sad situation which the older kids in the family are dealing with, and I liked that; I also felt for their mother, who is incapacitated with grief and presumably riddled with guilt at effectively abandoning her family. I liked Jonah; I wanted good things to happen to him.

I worry about sounding like a terrible person when I say this, and I wonder if this view 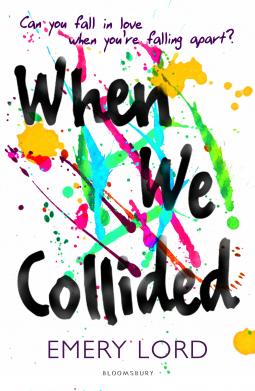 results from being 32 and having been in and witnessed unhealthy relationships, but I felt from the start that Vivi wasn’t going to lessen Jonah’s emotional load. Her own problems are subtly introduced, but evident if you think closely about the erratic nature of her language. And I’m not a complete sociopath; I sympathised with Vivi and wanted to send my sage and helpful words of emotional support through my Kindle screen and into her brain, but I still found her a bit exhausting. I’ve seen When We Collided compared to All the Bright Places, which I get, but my feelings about Finch and Violet were quite different.

Saying that, I respect the different ways in which When We Collided shows the reader mental illness, making the subtle point that nearly everyone will be affected by these issues in some way, whether directly or indirectly.  The characters’ reflections are immensely quotable on the subject; Jonah, for instance, says, “I won’t hustle my mom out of pain she earned” and Vivi is impassioned and eloquent in proclaiming, “To the deepest, most cellular level of my being, I resent people who believe that depression is the same as weakness, that “sad” people must be coddled like helpless toddlers.” I’ve been involved in Twitter chats recently about mental illness representation in YA fiction, and When We Collided deserves its place in these discussions; it really makes you think about your response to the characters and what they endure, unquestionably drawing an empathic reaction. I had a realisation midway through that Vivi has a lot of similarities with Blanche Dubois, from Tennessee Williams’ A Streetcar Named Desire; both have an emotional connection to their appearance, both have manifested their emotional issues in their behaviour with the opposite sex, and both are likely to provoke diverse reactions. For example, Vivi telling Jonah, “I don’t know how you can live in the same house as someone who is heartbroken without sensing it… I can smell heartbreak on a person. It smells like incense, sweet but burned” could come right from one of Blanche’s speeches; the sense that both have lived through the emotional ringer is what really links them.

When We Collided is definitely worth reading. It is emotionally affecting, with realistically nuanced characters, from the main protagonists to the peripheral cast of siblings and grown-ups. Throughout, I was reminded of the quote often attributed to Plato but quite clearly not actually said by him:be kind, for everyone you meet is fighting a hard battle. If this book makes readers more conscious of each other’s hard battles, Emery Lord will have achieved something impressive.

3 thoughts on “Messy, Throbbing Hearts: A Review of When We Collided by Emery Lord”