Top Ten Tuesday is a weekly feature hosted by The Broke and The Bookish and I am very excited to be taking part for the first time.

It is so difficult to choose just 10 books from this year and then to put them in order. I don’t want any of them to be offended. What if they stop speaking to me? Also, what if I now have sleepless nights worrying about getting my Top Ten wrong and am driven mad by sleep-deprivation?

Anyway, here is my first go at a TTT blog. I eagerly anticipate reading everyone else’s and tormenting myself with books I haven’t read.

10. Fates and Furies by Lauren Groff

This was one of those books in which all the people are vaguely unpleasant but that’s fine with me because I am a misanthrope. The second half, focusing on Mathilde and all the ways in which her annoying man-child of a husband, Lotto, doesn’t know her at all.

9. One by Sarah Crossan

I wrote at length of my love for this book here. Suffice to say it provides many feels.

8. The Accident Season by Moira Fowley-Doyle

I only read this book this past weekend but it was so extraordinary that I will need to write a lengthy ode to it here soon. The story, focusing on a weirdly accident-prone family, is intriguing and I loved all the characters.

7. Ready Player One by Ernest Cline

This book is far from new but I only discovered it when I got a copy in a Lootcrate. Considering that I am not a gamer, I loved this: the quest plot is really exciting and Cline’s style, dripping with pop culture references, is vibrant.

6. Simon Vs the Homo Sapiens Agenda by Becky Albertalli

I want to carry a copy of this around with me at all times so I can give it little hugs and be inspired by its loveliness.

5. Me and Earl and the Dying Girl by Jesse Andrews

I read a review of this earlier which gave it one star. One star! This is an outrage. Me and Earl… is one of the funniest books I have ever read and Iwill defend it to the death. With weapons and with wit. This is what I wrote about it while I was still recovering from my laughter injuries.

I bought Annihilation, the first of this trilogy, because it sounded cool and has a beautiful cover. I loved it because it was incredibly weird and unique and I basically had no idea what was going on – a situation only exacerbated by the sequels, Authority and Acceptance.

3. Two on a Tower by Thomas Hardy

I had a massive Victorians binge at the start of 2015 and this was my favourite. The age-gap romance and all the tragedy and yearning make Two on a Tower an incredibly beautiful book. Just to add to its appeal, it is also really short.

2. I’ll Give You the Sun by Jandy Nelson

I am basically in love with this book and have been banging on about it for months, including here. 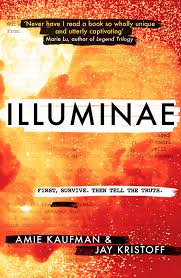 year and Illuminae is the bible, such is the level of my devotion to it. It looks beautiful, it’s genuinely riveting and it’s the closest thing I’ve ever found to Star Wars in book form, so I still plan to have it tattooed on my face.